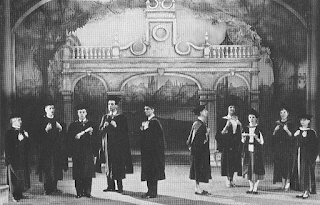 One of the biggest hits in Town, this delightful show, a Bristol Old Vice production, directed by Denis Carey with book and lyrics by Dorothy Reynolds and Julian Slade and music by Julian Slade, is presented by Linnit and Dunfee Ltd. and Jack Hylton. 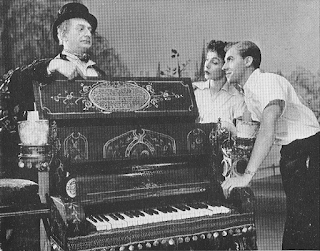 Newton Blick, the tramp, the owner of the magic piano, hands over this remarkable instrument to Jane and Timothy  (Eleanor Drew and John Warner), two young ex-students of the University, who have decided to get married. They are to have the piano for a month, and the scene is one of London's parks. 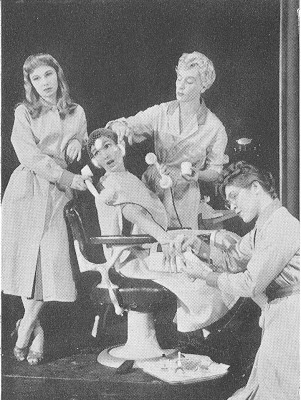 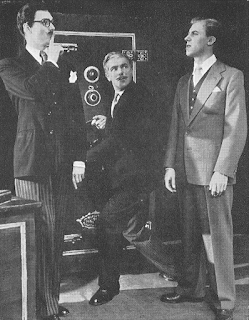 Another funny moment when Timothy calls on his Uncle at the Foreign Office. Michael Meacham as Fosdyje, the Ataché to Sir Clambsby Williams (James Cairncross, centre) sings "Hush-Hush!" (photo by Denise Marney) 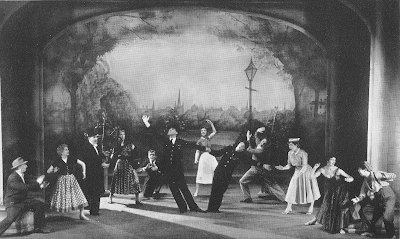 The company , inspired by the magic piano, cannot stop dancing to the number "Out of Beath."  Centre. Michael Aldridge as a Police Inspector and Joe Greig as P. C. Boot. 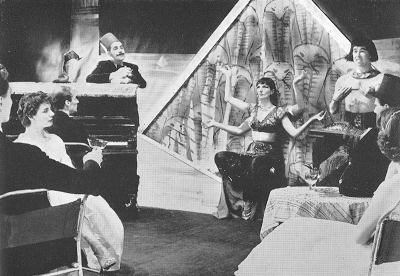 The hilarious scene in Cleopatra Night Club. Centre , Yvonne Coulette as a dancer with four arms, enterains the guests. Left (in fez) can be seen James Cairncross as Manager of the Night Club. (photo by Denise Marney)
Another very funny scene from the Night Club sequence, in which Dorothy Reynolds,  as Asphinixa, a singer, croons "Sand In my Eyes" into the microphone.  The guest L to R, are Christine Finn as Fiona, Hane, and Michael Aldridge as Augustine  Williams, of the Ministry. who is trying to suppress the famous piano. (photo by Denise Marney) 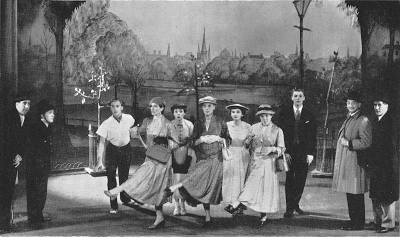 The company in another catchy tune " It's Easy to Sing, " just before they hear the news that the magic piano has disappeared. The delightful dances in the show are arranged by Elizabeth West, the settings by Patrick Robertson and costume designs by Alvary Williams. (photo by Denise Marney) 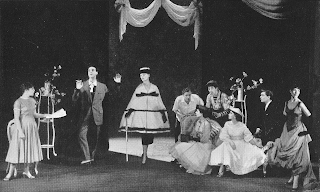 One of the most amusing scenes in the show, during a mannequin parade in the salon of a famous dress designer. L to R: Pat Heywood as the compère, Michael Aldridge as Ambrose, the dress designer, Dorothy Reynolds as a model, Timothy, Jane, Bob Harris as Troppo, the model. Before all ends happily there is a visit from a flying saucer and the company sing a reprise of the spirited hit number of the show, "Oh Look at Me! " (photo by Denise Marney)